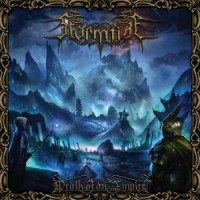 Stormtide is a six piece metal band from Australia. They coin themselves as symphonic death metal which if you ask me is selling themselves a little short. There a LOT of influences to chew on here from folky flutes to oriental type strings. I was pretty impressed to find all of the orchestral arrangements were done on keyboards as they have a very full sound and could easily at times be mistaken for more organic instruments.
“Wrath of an Empire” is their first full length album since forming in 2013 and let me say it is a doozy of a debut. If I had to draw a comparison it’d definitely nod to Equilibrium and Vesperia. Some points even a little Tennger Calvery or Black Kirin so to say their sound is a little all over wouldn’t be far off. But this is a good thing as they pull it off masterfully. From the first opening seconds Stormtide demand your attention with the epic and intense “Wrath of an Empire” and if your a fan of Viking/folk metal you’re going to give it to them. All in all I’d say it keeps a nice mid pace allowing all the instrument their time to shine. With solid pounding riffs and some really nice solos, to moments where the keyboards get to take over. And with no song passing the six minute mark things never get boring before we’re on to the next battle. The vocals are strong and fierce all through out and I was glad things never got “ballady” if there’s a word for that. I’m a big fan of the dual vocal approach and you’ll find a lot of that here. All the while everything stays very fresh as they have a very skilled drummer behind it all keeping your blood pumping and the pace right where it needs to be. The recording quality is top notch nothing ever gets muddled.
If you’re a fan of any of the aforementioned acts I wouldn’t pass this one up as I think these guys have quite a lot to offer.