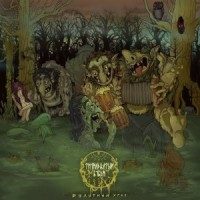 There has been a sore lacking in swamp folk metal this year (Trollgasm is the only one that comes to mind) and I hadn’t realized I was going thru major withdrawal. Luckily, my fix has just arrived in the form of the new Trinadtsatiy Buben album “Болотный угар” (“Marsh Madness”). Hailing from Ukraine, they are going against the grain as far as music you would be familiar with from there, Nokturnal Mortum, Kroda, Gjallarhorn, Paganland, Zgard, mostly Pagan/Black Metal it appears. So swamp metal it is and a great release to boot and more in tune with Russian acts like Svartby, Rogatiy Kolokol and Abracadabra, yeah swamp to the core. There is certainly a little Trollfest in here too, and I would say they are a little more “out of control” and experimental compared to prior effort (demo from 2013 “Между Навью и Явью”) I find nothing drives folk metal like accordion and keyboards combined and these guys light it up on every track. To add another ripple, they add in some mouth harp (?) and berimbau (I guess I would describe this as a cross between a string and a percussion instrument) So with all of these different instruments happening you would think it may sound like a train wreck but it certainly doesn’t as the metal and folk instruments blend pretty well on this release. Sure it is cacophonous but in the right way. I would also say it is not quite as murky as a lot of other swamp metal out there but has a lot of similar style to most swamp and troll folk metal acts.
The album is relatively short (less than 30 minutes) over it’s 9 tracks (intro plus 8) but that is usually the right way to do this style, short bursts of swamp energized tracks. Vocals verge on death/black metal but with a staccato delivery in some cases and long drawn out moans in other cases or some nice kind of chorals too.
This is a nice sounding release overall too, with a well-rounded mix and punchy production. Need some new swamp metal? Nothing else looming in the near future so this will be your go to one to listen to for the next few months… nice release.