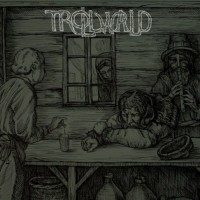 For those of you who were wondering what happened to the mighty Litvintroll look no further for they are no more. Luckily they have reformed on some level as the new project Trollwald. Featuring 5 ex-members of Litvintroll, it would be hard to not compare them to their former entity and they do sound relatively similar to their prior efforts.
Who do these Belarusians sound like besides their former selves? Well maybe a less folky Skiltron mixed with more power metal and a little retro sounding too like Utmarken and maybe even some Solstafir. You should have picked up on the fact that if you are compared to Skiltron you are going to have bagpipes or wind instruments in your repertoire and Trollwald certainly does. There are a total of 5 tracks here… intro plus 4 totaling about 19 minutes or so, not a whole album put good enough to certainly get reacquainted with them….or hearing them for the first time I guess too. Each track seems to have a nice heavy riffing/drumming as a foundation while layering in the folk instrumentation. Tracks are mid paced which works for their style with a steady pounding as opposed to a flurry of blast beats.
When I mentioned “retro” previously, you will definitely hear it in the keyboard sound where the “Hammond organ” creeps in on occasion to give it a ‘70s vibe here and there. For having 7 members, Trollwald do not have an overly busy sound….. the songs are relatively quick to grasp and get into and repeated listens aren’t necessary to figure out what songs are all about. I would say they have a more “matured” sound having used the Litvintroll albums as a springboard into this new venture and they sound a little surer of themselves. The mix and production are solid and needed to rein in what could otherwise have been a disaster to listen to but the music and vocals don’t fight here and there is a nice striation in the instruments where it is easy to pick out each individually. Keys and the wind instruments get that extra augmentation when needed as well.
It would be easy to say that this is Litvintroll repackaged as Trollwald but I feel there is a little more of a straightforward style to them and it seems more effortless and natural here. Don’t get me wrong, the styles are still very similar but the track lengths of the Trollwald EP are shorter overall and a little easier to get into to reach a broader fanbase… going commercial? Hardly just a tightened up version and giving you just as much in half the time. A great release and nice return to some of Belarus best musicians.