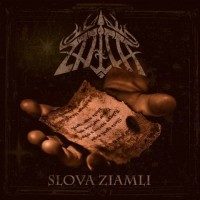 We’ve been getting to hear quite alot out of Belarus here at Folk-Metal.nl lately and Znich is another really good one up til now I was unfamiliar with, but after hearing Slova Ziamali I’ll definitely be on the look out for anything coming up from them. Oddly enough they’ve been around quite a while with four full lengths under their belt, but somehow I missed them. I’m happy to say that I was quite impressed with this EP. This album is solid folk metal with all the bells and whistles (literally) you’d come to expect, but with a couple nice progressive elements thrown in the mix. The opening track “дунаю” does a really great job showcasing all the aspects the band has to offer opening up with soft flute sounds straight into some solid rockish foundations and and an awesome clean/growl layered vocals. Once the bagpipes kicked in I was definitely reminded of In Extremo and some other folk rockers, but don’t let that fool you they keep it much harder than that. Everything flows very smoothly and when they bring it all together it hits hard and doesnt suffer any kind of saturation. Gotta say the recording quality was top notch absolutely no issues here. Honestly I feel like it just got better from here , especially liked the instrumental Golas with incorparating some hand drums adding a whole lot to the sound. The title track’s got some nice surprises you wouldn’t guess hearing the previous tracks. The keyboards have an excellent progressive sound throughout without being anywhere near over the top. They remind me of the flourishes from Litvintroll’s latest , but rather than being a small touch they compliment the entire song nicely. You can expect this formula throughout the other tracks without me going into each one. I think Litvintroll is the best best comparison for the overall sound I could make, maybe a bit of Boisson Divine guitar-wise but once again a lot harder.
I will say this, this is an EP , only 5 songs in total and they kept my attention for quite awhile the last week or so. Loved the shred/rock influenced guitar riffs , the folk elements , everything about it. Only wish there was more me to chew on. So if wanting more can be called a gripe, that would my only one. Great piece of work.