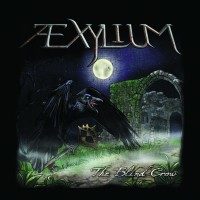 A new band in town. From Italy, eight men band Aexylium enters the world of folk metal. That in itself is a good thing. Nice to see that the scene is still growing. The band releases their first EP, containing three songs. What to expect?

One thing is for sure and that is the type of music the band is playing. When you’ve got flutes, bagpipes and a violin alongside drums and distorted guitars, you know you are dealing with folk metal. What kind, you ask? Rather old school, I would say. That’s not a bad thing, when it is delivered properly. Starting song ‘The blind crow’ has a good flow. Flutes and guitars go hand in hand, a bit of a surprise to hear clean vocals most of the time. Not a difficult song to understand. It’s a bit of fun with clear refrains and melodies. Not bad. Second song ‘Black Flag’ is a bit more heavy metal. A touch of Maiden in the guitar melodies. The singer oddly enough reminds me of Michael Gremio, the original vocalist of US power metal band Cellador. But without his power. In fact, I’m not a huge fan of the singer at all. He is not only lacking power, he has trouble delivering the text on the right note. His English is not bad for an Italian, to be fair. He just doesn’t have a proper metal voice. Third song ‘Revive the village’ is a true drinking song. Raise your horns, drink your mead sort of stuff. A happy song.

Is it good enough? No, it isn’t. It simply lacks quality. The singing, the structure of the songs, the diversity of the instruments, it’s all not bad. But not very good either. What is bad, is the sound of the EP. In 2016 it shouldn’t be too difficult to release an EP with a crisp, proper sound. And, I know we shouldn’t judge a EP by its cover, but what an ugly cover it is. How can you expect to be taken serious in a world where fans give you 10 seconds to prove yourself. One look at the cover and you’re history. I am sure the band can do better than this and I seriously hope they will.