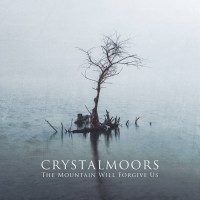 Celtic Pagan metal from Spain, brought to us by six experienced musicians. Crystalmoors were founded in 1995 and are now releasing their third full album. It took them 13 years to deliver their first album, so the 5 years that have passed since previous work ‘Circle of the five serpents’ is relatively short. The experience shows in the maturity of the songs. This is no simple stuff, made in a shed in a couple of weeks. No, these Spaniards take their time to do what they’re good at. And that’s making metal that contains pagan, folk and celtic elements. The deep growls of singer Uruksoth , bordering on death vocals, give the band an sharp edge. Yet the distinct melodies and moderate speed won’t put too many fans of folk metal off.
The band has been growing steadily. The title song ‘The mountain will forgive us’ would be a good one to listen to, to determine whether you will like the band and the album. A lot of contrasts here, with the dark vocals, combined with clean background harmony singing, guitars not very distorted, a lot of room for the bass player to show his skills. This is true craftsmanship. A little interlude like ‘A last breath of peace’ is another example of the band’s desire to make an interesting album. In my view, they succeed in doing just that. The folky feel is mostly in the melodies and the bagpipes and the different instruments that come out of the keyboards. If you’re looking for comparisons, Suidakra comes to mind. Not overly heavy riffing, not the pedal to the metal all the time. The big difference between the two bands is in the vocals.

The release contains 2 albums. Besides the regular album, you get acoustic versions of a couple of songs from all the albums of Crystalmoors. A good way of presenting the band in its entirety. Any negatives then? Well, not too many. In fact only one. And that is that the vocals, the sound of the guitars and the midtempo speed of the songs start to sound a bit the same after a while. But most of the times they vary nicely before that happens. A pretty good addition to the scene.

Tracklist Disc 1 – The Sap That Feeds Us