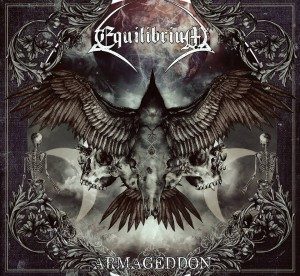 A much anticipated album from one of the most popular pagan folk metal bands around. Previous album Erdentempel was not to everybody’s taste. Mostly because a lot of fans thought it was too, well frivolous maybe. A song like Wirtshaus Gaudi was too funny for serious metalheads. Has Equilibrium followed the route to tongue in check metal? Or have they returned to earlier work like on Turis Fratyr and Sagas? Well actually, none of the above. All the elements that Equilibrium is made of, are there. This album stands on its own.

Most noticeable differences from former albums are two things. First, Robse’s singing overall is lower and darker. That is his more natural style. He can sing the songs originally sung by Helke allright, no problem. But the lower, the more natural. The other thing is that most songs are midtempo, whereas earlier work was often more furious and fast. It gives the songs more room to breathe, though it will decrease the size of the moshpits during gigs, I suppose. A third slight difference is that on Armageddon 4 of the 11 songs are in English. On the way to world domination it helps if a bigger audience can sing along, so an understandable choice.

We have already heard ‘Prey’ and ‘Born to be epic’. The latter being a stadium friendly song. Robse in good form, strange flute-like keyboards are guaranteed to make the crowd do silly walks in the pit and a song title you definitely want to sing along to. But is it really epic? Maybe it depends on your definition of the word. It used to mean a very long song with a story about a journey and a lot of layers and variation in it. Compared to this definition, ‘Born to be epic’ is not epic. It’s fun though and I am sure it will make it to the setlist for many years to come. ‘Prey’ is a different story. Low growls from Robse, not too fast until the end, the keyboards a bit much in front of the mix. If you like this song, you will like the most part of the album.

Another song that is rather typical of Armageddon is ‘Heathen’. Starting with a fast keyboard melody the song continues with an accessible refrain, medium speed. I wouldn’t mind if it would contain more outbursts of speed and aggression. And that sort of goes for the entire album. Production is good, there isn’t a bad song on the album, there is still a bit of the Equi-silliness in a song like ‘Helden’, Robse’s daughter appears on ‘Eternal destination’, speaking a few lines. It’s a good album. It shows the strength of the band. The only thing it lacks is a few songs to really stand out and have an impact like ‘Blut im Auge’ or ‘Der ewige Sieg’ had on previous albums. That would have made this good album a great album.