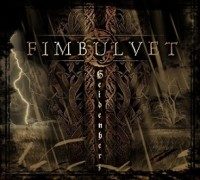 When I heard we had a new double album from Germany’s Fimbulvet I was quite shocked at the audacity to put out a double of new material. It started to make more sense when I realized it was a reissue of their two first full lengths and some re-recorded tracks off of each. The albums (“Ewiger Winter” from 2006 and “Der Ruf In Goldene Hallen” from 2008) both feature over 50 minutes of music in the pagan metal vein and are both solid efforts for sure. I would say when you hear some of the newly re-recorded tracks from these albums you will appreciate them that much more. After my review of their last studio album (“Frostbrand-Eines Bildnis Tracht” from 2014) I was anxious to hear what direction they were heading in and the re-recordings are the perfect way to blend the old style with the new. I wouldn’t say they have changed drastically over the years other than they have infused more melody in vocally and musically which gives them a more unique sound than before. From “Ewiger Winter” they have re-recorded “Walvaters Pfand” and “Wälderitt” and from “Der Ruf In Goldene Hallen” they have redone “Schwert Aus Stein” and the title track of this release and absolutely killer acoustic version for the reissue in “Heidenherz”. In each case here the newer versions outshine the originals in terms of the overall feel, sound quality and their ability to add the right touches to the redone versions. Let us think that time and maturity as musicians is the main reason why these tracks sound so good now. Is this is a necessity release? If you own the original albums (unlikely) then I would say possibly not but chances are you don’t and I would go and grab this package of two solid albums with some superb redone versions of their older tracks. A great idea by their newest label (Einheit) to take advantage of the situation and get out albums that you missed the first time around……solid release.