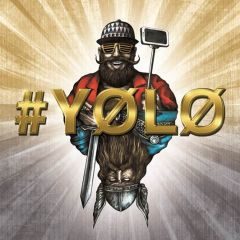 Finsterforst have returned, and if you’re anything like me you’ve been waiting in cheek clenched anticipation since July, when they teased us with the awesome Auf die Zwolf. Well the wait is over and I’m happy to say #YOLO is a killer album. If you’re familiar with them you know their forte is in extremely long and epic tracks ala Moonsorrow. In fact, in my humble opinion they are one the only bands out there who can keep my attention for more than five minutes. #YOLO however, is a huge departure from what we are used to from them with only two songs passing the five minute mark. Not to worry though because they pack all their epicness in nice concise packages that run the gamut of horn-heavy folk all the way to hip-hop?! Yes you read that right, it’s pretty safe to assume that if Finsterforst had a drawing board , they took a battle axe to it set it on fire, and drank all night discussing how they were going to mess with all of us. It’s obvious from the massive changes in direction they are taking ,and the lyrics these guys are trying not take themselves so seriously and just have some fun with these tracks. One of the more notable changes is lyrics in English from German. This time around they’re taking a more tongue-in-cheek aproach with the lyrics more akin to Nekrogoblikon or Alestorm. It’s an absolutely fun album to listen to so to that effect they definitely accomplished what I believe they set out to do, put out some crowd pleasers. Im positive a Finsterforst concert is going to be a must see. If I have a gripe with the album it’s a couple of the covers. This album is pretty much split in two between the first half of new original songs that while staying true to Finsterforst form, take a couple pages from their contemporary acts like Finntroll and Trollfest. But I wont ruin any surprises here you should really hear it for youself. The second half is covers and this is where it falls a little short, I’ve said it before, I absolutely love a folk metal cover. In the cases of Beat It and Wrecking Ball though I just wasn’t feeling it. I think it’s not that idea wasn’t sound, they fit well with #YOLO’s fun theme. It’s that they didn’t own them. There wasn’t anything about these two covers that scream Finsterforst, if there is a song where you shouldn’t worry so much about staying true to the original, it’s pretty much any Miley Cyrus song. It’s a funny idea but in the end it pretty much just sounds like the original song with some metal screams and guitar. Beat It essentially has the same issue. The rest though are fun to listen to and don’t completely bury their sound too much. In any case , however,I hope they do take another whack at some covers because it’s pretty obvious they can do about anything they want and it’ll be worth the listen. So go out there find a copy of #YOLO and blast it all day and may the Forst be with you!

Orphaned Land
‘All is One’