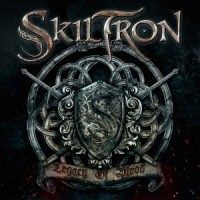 A well-known name from Argentina. Having toured Europe more than once, hearing the band’s name may make you think they are bigger than they actually are. And why wouldn’t you recognize them, if only because this is already their fifth full album in a decade. Typical of Skiltron’s music is the mix of folk and power metal, clean singing, bagpipes and most of all a catchiness. Not unlike Elvenking or Spellblast.

First two songs are of the kind I just described. Pretty fast, though not with double bass all the time. Looks like we are in for another fine party. In fact ‘Hate of my life’, in spite of the title, wouldn’t look crazy on a Freedom Call album. And this is probably where a lot of readers shake their metalheads and look for another band. Indeed, it requires a taste for happy music to enjoy the album.

Further on, tempo decreases substantially. ’Committed to the call’ starts pretty slow. So here we are waiting, waiting, waiting for the speed to pick up. And it doesn’t. What we are left with is just a slow, catchy song with the clean vocals rather in the front of the mix. It could use a bit of spice. It’s performed rather well, with bagpipes and all, mind you. But in my opinion, it’s radio metal.

So now, we are ready for some more action. Let’s have it! But no, ‘Sailing under false flags’ is a bit more of the same. ‘Next one, ‘The taste of victory’: ditto. Only when we get to the 8th song ‘All men die’ the speed is back. After 5 slowish songs. I am not sure I understand the order in which the songs are put on the album. With twin guitar solos and the bagpipe alongside, this is my favourite song by far. Last song ‘I’m coming home’ is another slow one. Again, not a song I would conclude an album with, if I wanted to leave the listener craving for more.

Not a bad album by any standards. It will be interesting to experience them live. Which we can do pretty soon since Skiltron will be touring Europe extensively in September and October. The band is known for their party music. Will they deliver a party that does their music justice? We’ll soon find out.