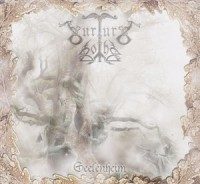 Suturs Lohe is a Viking/pagan metal band from Germany. Seelenheim is their fourth full length, since 1999. To give you an idea of their sound they’re a bit like early era Borknagar with a touch of some first wave black metal. I’m conflicted at points with this album as it almost seems like its almost two albums altogether. On the first track we are greeted with a full sounding orchestra type opener, with some spoken word to build up intensity.U nfortunately from here the only non standard metal instrument you’ll hear is flute. The next track blasts right in with what I’d describe as pretty standard fare black metal. Super fast tremelo picking blast beats all throughout. It’s decent enough but nothing really groundbreaking.What’s strange to me the rest of the album does not retain this sound or speed at all. From the second track on things get much slower but the songs just don’t seem to gel together. Nothing really stuck for me and that’s not to say anything in regard in musicianship because there are some good ideas here. But the songs take on a sleepy lethargic feel. Even when it picks up parts go on too long. My favorite track Gotengrab is a prime example it’s got some really nice acoustic passages , the clean vocals work together , the a flutes are a nice touch. But it’s 5 minutes until the build up ends and we get some kind of a peak but that part is over quick. If some of the passages didn’t last so long this could be a really good record, but due to that and some really slow parts just don’t flow with everything else, it just didn’t keep my interest as long as it could.