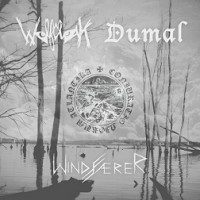 I debated whether to call this a split or a compilation as it features three bands so “split” didn’t seem appropriate so compilation it is. Featuring 3 bands and 3 tracks from each, I would suggest you lash yourself down to something and prepare for a tidal wave of black metal fury from the north east coast of the US (namely Pennsylvania and New Jersey). You may not be familiar with 2 of the 3 bands here as they are more regionally known and I hope this collection will change that…. those acts being New Jersey’s Wolfcloak and Pennsylvania’s Dumal. The third act need no introduction as it is black metal folksters Windfaerer. After an incredible album from 2015 (“Tenebrosum”) they are contributing 3 new tracks to this comp as well and are the last 3 on this.
First off you get pummeled by 3 tracks each from Wolfcloak (“Pit Of Fire”, “The Frozen River Part II” and “To Grasp The Chalice”) and then 3 from Dumal ( “The Last Christian”, “Dead Of Winter” and a cover of the Judas Iscariot classic “Gaze Upon Heaven In Flames”) and finish with the Windfaerer tracks (“O Insonho”, “Cromlech”, and “Lord Of The Twilight”) It is like walking thru an inferno while listening to this with each track being equally devastating. I would say that Wolfcloak and Dumal are overall pretty similar sounding, tapping into a classic black metal sound in both cases. Memories of old Emperor, Mayhem and Darkthrone albums danced in my head listening to their respective tracks, filled with crushing riffs and blast beats for days. The 6 tracks are a great primer for the vast epicness of the mighty Windfaerer, not to say that the Wolfcloak and Dumal tracks aren’t epic but I was anxious to hear the new tracks from one of the United States brightest hopes for the future of folk metal. Listening to Windfaerer in this context you really do hear the black metal come out more than if you listened to them solitarily.
Over the course of the tracks though the folk metal starts to meld more into it and has them start distancing themselves a little but still having a tangibility to the heavier stuff. “O Insonho” is a 3-minute interlude instrumental…stripped down with acoustic guitar and the omnipresent violin. This leads into the soul stealing “Cromlech” where you will feel the full force of Windfaerer, building layers of riffs upon riffs and at just over 5 minutes. Just when you think you have had enough, they kick it up a notch with an Armageddon fuelled 8 minute plus “Lord Of The Twilight” which I might say may be their best track to date. Equal parts black metal, folk metal, thrash and soundtrack, “Lord…..” has it all and is relentless and powerful while still showing restraint and not getting out of control. All in all, this compilation is killer on numerous levels and offers a nice intro to all things heavy from the Garden and Keystone states.
A great idea to collaborate on one release and sample a little of all 3 bands “Coniuratio Nigrum Atlantika” by the way translates more or less to “Black Atlantic Conspiracy” ….I couldn’t think of a better title if I tried…..