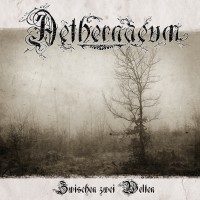 Anyone who is familiar with the works of Aethernaeum will know that these Germans play black metal with a folky side. The latter mostly coming from the cello player. This single is an in between, to kill the time for the fans before the next album is due. So not an EP, which seems to be the standard these days. Only two songs, 10 minutes in all. Long enough to keep the fans waiting for more. And yet not too long to become half an album.
‘Blut und Traene’ will not surprise the followers of the band. A gentle intro and then the war starts. Full speed ahead, led by the black vocals of band leader Alexander Paul Blake. Clear sound, so we can hear all the instruments. The cello is a very natural part of the music. It’s not a gimmick, it’s not overly upfront. I’s just a fitting part of the experience. At black metal concerts, in general you don’t get to see a lot of moshpits. This song might lead to an exception.
Second song ‘Das Urwort’ is a lot slower. Not what you would call typical atmospheric, although the music does bring you in a sort of trance if you listen to it three times in a row. Definitely a sombre and yet sort of cosy song. Does that make any sense? Try the band on for yourself. Lovers of blackened folk won’t be disappointed.