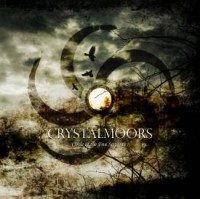 Circle of the Five Serpents is the third full length album from the Spanish folk metal group Crystalmoors. Its reissue comes right on the heels of their massive double album release The Mountains Will Forgive Us. So if you aren’t familiar yet this year will give you quite a bit too delve into. It’s really not too old an album having been released in 2011, but I land in the unfamiliar group myself so its all new to me.
Doing a quick side by side comparison I didn’t notice a huge difference in the sound quality so if you’ve heard it already you know what to expect. As far as to their particular sound it’s definitely got some folk elements leaning more to the viking/pagan side of things. Notably the core of the metal music itself is very black. They don’t paint themselves into any corners though, there are some very strong Death Metal influences here too. They do a really good job pulling all the parts together with slower droning black metals riffs that ooze a classic black metal tone then at the drop of a dime, going into full blast beat and gutteral madness. If I had to pick a word to describe their brand it’d be nostalgia. Strange seeing as I hadn’t heard it? Not entirely, and it’s probably the best part of it for me. While not exactly the most flashy and technically proficient genre out there, black metal has a raw emotion to it that only black metal can pull off. Crystalmoors is absolutely faithful to this brand of music, each song being its own but reminding me of so much about why I love folk/black metal in the first place. Taken as a whole this album will take you on a journey to a time when folk metal wasn’t really quite a thing yet. Where hearing the accent of the flute over the darkest music that all of metaldom could muster was just a crazy idea that somehow worked. Sure that’s not the time we live in now, but this music does a pretty good job of capturing that feeling all over again. Particularly in the case of Orgen, definitely my favorite track here. It’s got it all in it. Absolutely blacker than black really nothing not to like about it. The only drawback that struck me would be the mix. Sometimes when the drums went full blast things got a little muddled and you couldn’t hear the guitars as well. Overall though the rougher mix was a boon not a bane, and tended to lend more the sound than hurt it. A great choice if you haven’t heard it yet, there’s honestly a little something for everyone here.