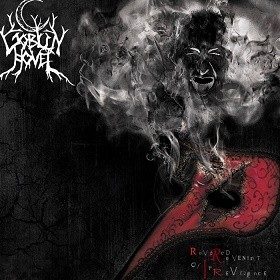 Upstate NY’s Goblin Hovel have returned for another chapter in their storied history with their latest release “Revered Revenant Of Irreverence”. GH are one of those bands that are equally prolific while at the same time being relatively unknown……let us change that shall we? I would say they have around 15 releases or so from full albums to singles to compilations in a 4 year span….. if they keep it up they will have 100 albums in no time. Churning out music is one thing but if it’s terrible then why bother? Luckily the Hovel keep getting better with each subsequent release and “Revered…..” has been on constant repeat since last week for me. I am sure we will get into the immediate conversation of what constitutes being “heavy” once again and GH is not heavy necessarily upon listening initially….I would say they are folk with world music and metal influences. However, the depth of the music and words and the combination of styles both musically and vocally will make you weigh the heaviness differently and you will see this is as heavy as gravity on Jupiter. Living in the acoustic world primarily makes Goblin Hovel work that much harder to get the heaviness across that much more and it does in bucketfulls. “Revered….” features. 7 tracks totalling about 30 minutes or so…. debate amongst yourselves if this is an EP or not. I don’t feel it necessary to dissect each track here but I will say that if you take some of the musicality of a less piratey Dread Crew Of Oddwood with the quirkiness of Trollfest and the swampiness of Svarby and you have Goblin Hovel…..that is what I hear anyways. Filled with some boggy folky tracks ranging from instrumental and sounds to more up-tempo to dare I say, ballads, “Revered….” Is almost one of those albums you would never think would grab you if you are into heavier stuff but you will immediately become entranced by it. Layered with beautiful subtle strings and percussion, varied vocals styles and semi-creepy instrumentation, this album sounds like it could have been recorded live in the woods with a tape recorder next to a blazing fire. While most folk metal from America doesn’t seem to have the connection to “folk” music as much as their European counterparts, Goblin Hovel have nailed on this release. With an understated mix and overall smoky sounding recording, “Revered Revenant Of Irreverence” is as much a tongue twister of a titled album as it is an instant classic.
Who needs electricity when you can produce music as powerful as this? With albums by Eliwagar and a slightly heavier Fejd possibly being Top 10’s for me, Goblin Hovel is joining a select group of artists leading the way in acoustic music being heavier than anything else….amazing release.