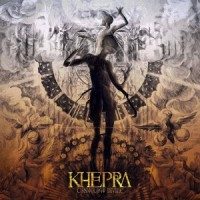 In case you wondered, yes we do have discussions about whether to review a certain album or not. These discussions are about two questions. One: is it metal enough? Two: is it folky enough? If one of the questions is answered with a comfortable ‘yes’ and the other with a ‘maybe’, usually the quality of the album is the decider. In the case of the three men Turkey based Khedra there can be no doubt about the level of metal. It is on the edge of being folky enough. So, you have read the rating, this is a very good album and therefore definitely worth a review.
If not overly folky, what is it then? Basically it’s melodic death metal with oriental influences. Raw vocals, not as low as true death metal, no shrieks like you find in black metal, no clean vocals like in power metal. Just very powerful, gruff but understandable. The folky side is found within the melodies and the use of oriental and acoustic sounds. For instance in ‘Evil incarnate’ all these influences come together very naturally. Add pounding double bass and you will have no trouble at all picturing a big fat metal party. In the same song you will be thinking of Fleshgod Apocalypse. The vocals as well as the classical melody lines remind strongly of the Italian rising stars. Don’t worry, it’s not a rip off in any way. Khepra is original enough to stand out among all the other competitors.
Although this is the band’s first full album, they have been around for a while under the name Gurz. Three of the former members now form Khedra. And what capable musicians and song writers they are! Turkey is not known for their many metal bands, but maybe that’s about to change. If it comes in the form and quality of bands like Khedra, I say: let us have it. It’s the best album I have heard in a while that is not very fast all the time. Sure, there are plenty of times you won’t be able to keep your head still, but overall the album is played at a moderate speed. The variety of bombast and tranquil parts works perfectly. To name more songs would do the album injustice. The quality is high and constantly there. The spoken word parts don’t even bother me. Why not a 10 out of 10, then? To achieve that the album should be a bit longer than 41 minutes. I sincerely hope the band will stay together and give us more of what they are good at. I love it.