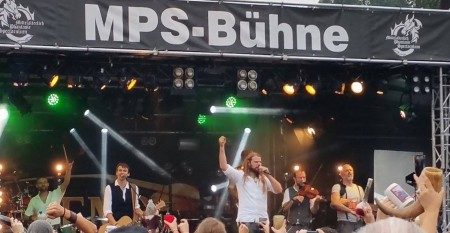 About 3000 contributors, 22 locations, 25 times pro year. What do you think these impressive numbers will stick too? If you’ve never been there, I can imagine you haven’t a clue. But they belong to the world’s greatest Medieval Culture festival: MPS (which stands for Medieval Fantasy Spectacle). Thousands and thousands of people travel to one or more of these nice weekends, to enjoy this unique, peaceful and homely event.
You can be whatever you like this weekend, a lot of people come in their regular clothes, but it’s very nice to see a large amount of the visitors dressed in medieval clothing, but some elves, goblins and other fantasy figures as well.

There are many things to enjoy here, and be wise, put a cross in your agenda for the whole day, any less is way to short. Enjoy the travelling entertainers, magicians, the stilt artists.. And while the kids join in with the knights tournament you can enjoy your mead at one of the bars. Watch the knight tournament together and when you’ve become hungry, just visit one of the many food-stands where they don’t sell the regular chips and hamburger, but very nice medieval inspired food of all sorts.

And then there’s always what Folk-metal.nl is interested in, bands, bands and more bands. Borken has no less then 3 stages where there are non stop musicians and we’re not talking the small local bands, but the big names in Germany’s Folk and Medieval scene, like Versengold, Mr. Hurley und die Pulveraffen, Cultus Ferox and Saltatio Mortis. But there are international bands as well, the Dutch band Omnia is one where the Germans are very fond of, The Dolmen came over from England and Saor Patrol form Scotland and the all international band Celtica was present at Borken as well. A lot of fun and too little time…

Versengold
We join in at the MPS stage at the end of Mr. Hurley und die Pulveraffen, which I have seen better, the last few songs were more travelling gimmicks to me.
Versengold grabs you at once. The band is very likeable and with a very down to earth frontman, they really seem a band of the folk. Unfortunately we have other plans for this evening so we have to do it without their bigger hits, which are all part of their evening-setlist. But about thousand people really enjoy their concert and are cheering and waving along. It’s noticeable their sound has become slightly more solid all over now the band is adapted to the extension. With drums, bass, lute, guitar, violin and nyckelharpa they didn’t only manage to get a slightly heavier sound, but they sound even folkier as well.
In the evening we were lucky enough to see the last few songs of their big concert, where they managed to get a few thousand people to go out of their mind, while the immensely popular Omnia is playing at another stage.

Celtica
We move to the Festival Stage while enjoying a lot a nice merchandise stands on the way, jewellery, nice food, mead, everything is there. Celtica has just started their show. Show is the exact word for their performance, everything about Celtica is very polished. Their costumes match perfectly with each other, their performance is very thought-through. The band plays instrumental songs and very rarely add some words to their music. In a well known song like ‘Whiskey in the Jar’ for instance the lyrics are stripped down to ‘With me ring dum a doodle um dah, There’s whiskey in the jar’, which even enhances the feeling it’s all a big show. The bagpipes and guitar-riffs manage to draw more people to this stage during the concert. They put down a neat and tidy show, I’m still missing some vocals and spontaneity.

I don’t know which god rules the weather at the MPS, but he did a fine job for our schedule that’s for sure. After Celtica laid down the last notes it started to rain a little and gave us a perfect opportunity to grab some food and eat in a nice sheltered place. During this little break we got to listen to a very nice piece of The Dolmen ‘Witches Woe’, looking at the stage I noticed, Saor Patrol’s Steve has again joined in, just like last year. I was very pleased, but on the other hand I was instantly thinking, will they put an end to the song while it’s still great or will they go on past the expiration date like they did last year. Sadly enough that was what they did again thus ruining a great song a bit. Unfortunately with a busy schedule like this MPS we couldn’t see more of The Dolmen.

Cultus Ferox
Shame on me, but I had never seen Cultus Ferox live before. Glad I got to see them now. Cultus Ferox plays a medieval show with basicly only percussion and bagpipes. Well that’s not quite right, they try to add a lot of humor to their show, something which is not always appreciated to the max by the audience. Their act with the little devil who would say what the audience had to do for instance. The public didn’t corporate, leaving feuerteufel a bit awkward at the stage with his little puppet. The songs were all pretty decent at least, but their music is at it best with the catchy bagpipe tunes and pounding percussion, which can make it hard for anyone to stand still.

After this we have again a little pause where we get to see a little peace of Soar Patrol, which is sharing the Folk Stage with The Dolmen today. While we are enjoying our Dracheneier (Dragoneggs), nice sweet small fried balls, we get to see a little piece of the nice show of this Scottish band, based on only bagpipe, guitar and lots of percussion.

Omnia
After this it’s time for Omnia. This Dutch band has just released a new album ‘Prayer’, of course we get a lot of songs of this new album with ‘Wolf An Dro’ as a personal favourite, but the band doesn’t forget to play some of their other ‘hits’ as well. A pleasant surprise to hear Jenny has picked up the hurdy-gurdy again, some tracks really benefit of this nice sound. A lot of their songs has such a nice catchy feel, you would almost forget how skilled these musicians are. Not only is Jenny a skilled player of many instruments, Steve, Satria and Daphyd are very skilled musicians as well. The songs give space to all these nice instruments, backed up by the very decent drums of Rob. Quite amazing how the band manage to write so many of these nice songs. The band is immensely popular among the German folk-fans, so the area in front of the stage has become as crowded as is possibly can.

Saltatio Mortis
Well, then there’s always Saltatio Mortis, the headliner for the Saturday evening at almost every MPS event. And again and again I must admit they deserve it. I’ve seen Fiddler’s Green doing a same awesome job, they’re worthy of doing this as well. After years of playing at the MPS Saltatio Mortis seems to be named in one breath with the MPS. They put down a great show once again, with lots of pyro, tons of bagpipes, humor, alcohol and everything which should be in a SaMo show. The field in front of this main stage is loaded with thousands of people having a good time. No need mentioning we get to hear a lot of their nicest songs, from their latest album they play for instance ‘Wo Sind Die Clowns’. Lasterbalk is again a perfect host of this show and tells us many story about the MPS or other stuff, in one of his talks he points out Saltatio Mortis is, always was, and will be forever not only a story telling band, but a band which has something to say about certain matters in society as well. They dare to take a stand against things! And I can only agree, they’re at their best this way, not only fun, but a message as well. And in this way they go on for almost 90 minutes treating us one lots of nice songs.
But with all his experience Lasterbalk has forgotten one thing: the power of the audience. When they played their ‘last’ song and try to say goodbye for the first time, the audience decides they go for the extra songs already and start shouting ‘Zugabe’. No matter how often Lasterbalk tries to explain how it works (band says goodbye, leaves the stage, and then the shouting should start), the crowd decides against it and keep on shouting while they’re still at the stage.
But of course they play some nice extra songs for us, so we can leave for home very satisfied.

And the good news is: although the season hasn’t quite ended for this year, and there are some Christmasmarkets as well, the MPS will be back next year in many places throughout Germany!