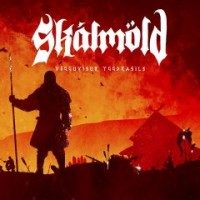 Iceland’s native sons Skálmöld have returned in 2016 with their 4th full length entitled “Vögguvisur Yggdrasils” (which I will translate as “Yggdrasil Songs”) Based on title alone you could probably guess this might be a continuation in their concept album phase and you would be right. It appears the 9 tracks seem to all be based on the nine worlds in Norse Mythology connected by the Yggdrasil tree. In typical form, the concept is there and tangible but you won’t be smothered by it. Remember “Með Vættum?”, again a conceptualized album but not such that you are limited to listen from beginning to end.
I have yet to be disappointed or let down by anything they have released and “Vögguvisur Yggdrasils” is another classic album by them. I would say there is a slight shift in overall sound and style….. don’t worry this isn’t a top 40 radio album. It sounds to me that there has been more emphasis put on harmony (both vocally and musically) as well as I believe creating a more accessible overall sound. I would draw comparisons to Faroe Island neighbors TYR in terms of musical trajectories being very similar and no one will say they have “sold out” either. While the backing and vocal harmonies lull you into a sense of calm, there is no doubt that the volcanic vocal delivery of Björgvin will always bring you back into the heaviness. After just a few listens the tracks to me are more memorable, simpler and catchier riffs with vocal lines that will echo thru your head and you will be singing them afterwards over and over. “Niflheimur” is a great example… an easy to grasp main riff and somewhat less busy track and dare I say just a more straightforward metal track. I have been hypnotized by “Vögguvisur Yggdrasils”, plodding, back breaking riffs, Baldur’s background wailing and guitar work, Gunnar’s baritone and keys, Þráinn Árni’s guitar shredding and the killer structure/framework of Snæbjörn and Jón Geir. It struck me that there is a nice balance between everything here and where one song may seem to have let’s say “more keys” or “less vocals” other tracks may have “more guitar” or “simpler riff”, there is a diversity here while still remaining true to their signature sound.
I have said repeatedly that 2016 has been the greatest year in music EVER. To put it in perspective, there have been now, with the release of “Vögguvisur Yggdrasils”, 4 amazing Viking metal concept albums released in 2016 (Amon Amarth, SIG:AR:TYR and Talamyus). Is there enough room for all in your top 10 list? I hope so since they are all deserving. Skálmöld have once again released an incredible album filled with Icelandic goodness with equal portions of heavy, melody and maturity.
Production and mix are understated and there is a very natural, lively sound to it with a depth giving sometimes almost a three-dimensional feel to it. The only question that remains for me… when is the US tour happening? Another killer album!