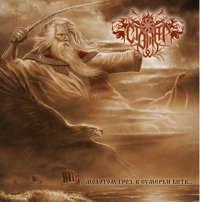 Some bands and albums are difficult to make your mind up about. What sort of music do you hear? What do you like and what not? This is not the case with the new album from Russian Stojar. We hear proper folk metal and we like it. They are in the same corner as fellow countrymen Dead Little Bertha.
Молотом гроз, в сумерки битв… is the logical successor of Slava Perunu! I had the privilege of reviewing that album last year and had high hopes of this one. And I am not disappointed. Expect fast paced songs of 4 minutes each with a big role for the accordion, clean female and harsh male vocals. And keyboards. So, purists, stop reading. Party animals, buy the album.
Compared to the previous album, Молотом гроз, в сумерки битв… is a step forward. Not a huge step. And that wasn’t necessary, because Slava Perunu! Was a pretty mature album already. This one is a bit better on all the important elements. The sound is even better. The songs are even more interesting and varied. And the album works well as a whole. Meaning that the occasional slower songs like На холодных камнях, одеялом из мхов make a pleasant change to the overall stampede on the rest of the album. This song may be a bit too easy listening for many, though.
Personal favourites are На стяге пламенной зари… and Памяти Слава, reminding me of the melodies of Polish band Merkfolk. Typical Eastern Europe folk metal, sung in their native language. High quality all around. Time for a few of those bands to join forces and start touring in the rest of the world. Are you paying attention Paganfest?