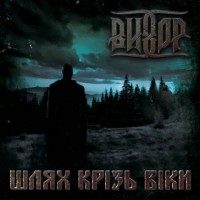 With releases this year by the mighty Winterhymn and the debut by Trinadtsatiy Buben, Soundage has certainly found some amazing artists to have under their wing. Add the latest from Vykhor to their ever increasing roster with their debut album ‘Krizʹ Viky’ (The Path Through The Ages). This Ukranian 6 piece will have less in common then you may think with their countrymates….. I believe you instantly think of black metal/pagan acts like Drudkh, Nokturnal Mortum, Kroda, Zgard and numerous others when thinking of the Ukraine. Vykhor have more of a folksiness about them and remind me of Zaria or Brezno (both from Slovenia) with a mixture of heavy and folk music, male and female vocals and woodwinds (namely flute). There are 8 tracks here (7 plus instrumental intro) totaling around 42 minutes or so length of tracks ranges from 3 ½ minutes to 7 ½ minutes. I think the length of tracks is a telling sign of a band that is still searching for what works for them stylistically…..do the shorter tracks work better than the longer tracks? Well, they both seem to work rather well in this case….there is enough substance to keep it interesting in all of the tracks which is a good sign. I think one of the main reasons why is they don’t overdo the speed, most tracks are pretty mid paced and build the mood and the track slowly which may not be to everyone’s taste but I like the way it works for Vykhor. The interplay of the flute with female vocals with the harsh male vocals is also a big selling point here….creating a dynamic layering in each track. The songs for the most part are relatively simple in construction….. no overly complicated riffs, time signatures, etc. pretty straightforward folk/pagan metal. I would say the flute in every track could get a little monotonous and maybe expanding into other woodwind instruments would be beneficial. The production is on par with the style with the flute being the most prominent in the mix, guitar could be a little beefed up to give it a little more edge to it.
A solid effort for a debut album and no wonder Soundage signed them… a bright future ahead for Vykhor.