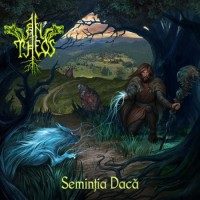 Romania has some really good folk metal acts, established acts like Dordeduh and Bucovina for example and newer acts like Ashaena and now we have a debut album from An Theos entitled “Semintia Daca”. This 8 piece from Bucharest have put together a very impressive debut filled with solid folk metal thru and thru with touches of melodic death as well. With 8 members it could be cacophonous but that is definitely not the case here with An Theos creating an inviting overall sound with an edge. A couple of bands that came to mind while listening were Distoriam (one of my favorite debuts from 2015) and the always epic Kanseil and even a little Boisson Divine.
There is a total of 8 tracks totaling over 40 minutes with most tracks being in the 4-7-minute range. One thing that struck me was that by having this many performers you really can do a lot obviously musically but also vocally. Tracks like the title track for example features both male and female vocals as well as pretty strong choral chants and backing vocals. Folk instruments like violin, accordion and flute (presumably) are pretty easy to pick out and you will possibly hear parts featuring mouth harp and the tulnic (a kind of alphorn native to Romania) although not as super discernable. They mix up the tempos… some tracks a little more subdued ( “Prin Viu Grai Strămoșesc”, “Nedeea Lupilor”) and some a little more turbo charged (“Potpuriu”) All the tracks are fun to listen to….and it actually sounds like they are fun to perform as well. The spirit of the band I think really comes across in the recording being very cohesive and not at all what most debuts sound like, trying to find the sound that eventually you will fall into.
This is a very accessible and catchy riff laden album for folk metal fans for sure, never venturing into super heavy or fast to much but not tame either. A solid recording and mix make this even more enjoyable with a nice striation in the sound with instrumentation being well thought out… ”Brațul de Fier” has a great guitar/bass/drum part that really shows how well the mix was executed. A superb debut album and a strong contender for my list of debuts for 2016.