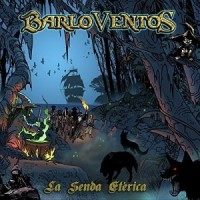 Two of Argentina’s best exports (Skiltron and Vorgrum) are now joined by Barloventos as another fine export as well. With a different take on folk metal (going the fantasy/pirate route), Barloventos have just issued forth their 2nd full length with “La Senda Etérica” (“The Path Eterica”).
I knew I had heard their first album at some point (2014’s “Contra Viento Y Marea”, ”Against Wind And Tide”) which I think was decent if not fully realized in terms of song writing and just overall sound. “La Senda….” is a definite improvement with better songs, better sound and more energy. On the treasure map of pirate metal (couldn’t resist) they aren’t as thrashy as Lords of The Drunken Pirate Crew or as swashbuckling as Alestorm or quirky as Dread Crew of Oddwood but land somewhere in between with a very power metal sound adding folk touches of keys and violin. I think the new album has a more cohesive sound with better tempo, structure and ideas……more focused indeed.
Most of the 9 tracks are in the 4-6 minute range, plenty of time to swill grog. The album definitely grows on you with repeated listens with some very catchy riffs. There is a very “traditional” sound about it too with a style that seems very “throwback” in origin. This is a decent album with good ideas, better songs and solid musicianship. Sonically, the mix is average and does inhibit it a little bit, not much of a unified sound with lead vocals being a little too out front for my liking but still a fun listen. Lots of good pirate stuff out this year and Barloventos is certainly another one for your plundering… good album.