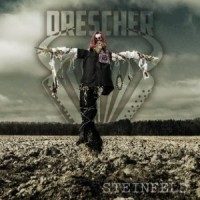 Napalm has signed up the Austrian Trash/Folk-metal band Drescher, and they’re not only releasing their debut album with a few bonus tracks, but they release a whole new album as well. ‘Steinfeld’ (Field of stones) goes on in the distinct style of Drescher.
All ingredients of the first album are there, pounding drums, thrashing guitars, ‘clean’ vocals in this nice Austrian ‘dialect’ and on top of this all the accordion.
Nothing has really changed in Drescher, but why is it this one is a lot nicer than its predecessor. Is it maturation or has the band doctered on their sound a bit, whatever it is, it sounds nicer. Where they are a bit all over the place and not very special on their first album, they managed to get themselves more together on this one.
Drescher was in for the catcy tunes in the past as well, no wonder they covered songs of Mötorhead, Falco and the Rolling Stones. But on this album they seem to draw this catchiness into their own songs. Listen to songs as ‘Adrenalin’ and ‘Unten’ they could be popular in the alternative charts. These songs are fit for a large alternative audience. Catchy choirs as in ‘Endlich Leben’ are another example of this, it’s quite obvious Drescher doesn’t like to remain an underground band for long, they have all the ingredients to become a major one in their own country Austria, where people can relate even more to their music due to the Austrian vocals.
The accordion played the lead in their previous album as well, but this sounds much more integrated now, in songs like ‘Der Held’ the accordion is not only very well integrated in the song, but definitely they key to the whole song as well.

Great follow up by Drescher, I’d never imagined I would like their follow up of their debut this much. Great compliments to Drescher for the minor adjustments in their music which give it this very nice taste at this album ‘Steinfeld’.