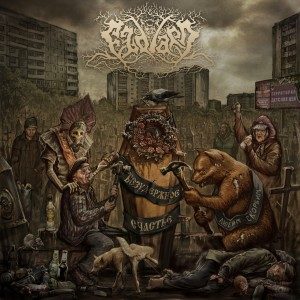 Another great band Russia Eldiarn has released their second full length album. I hadn’t heard them before this record so I had to look up a couple older songs and actually had a hard time deciding which was better. This band hasn’t been a around terribly long but they definitely have a good handle on their craft.
In terms of differences I’d they say did really good this time around with the mix. It wasn’t bad before but rather than the strings kind of being more dominant or at the forefront they are around the same volume, like a more natural part of the band. Eldiarn is only a five piece so I found it pretty impressive some the epic moments they pulled of without more members/instruments. The band as whole is very complimentary of each other and the play off one another in a way that seems earthy and grandiose at the same time. On the metal end of things they are very thrashy. I’m a big fan of technical riffing and there’s definitely some awesome riffing to appreciate. With the drums we have even more top notch performance to enjoy, mostly keeping a nice mid paced gallop throughout, but also very technical. I’d say their particular brand of metal borders somewhere on thrash and melodic death metal. Definitely keeps your attention and never gets boring. There is however a lot more to their sound than the metal, if you were to start at the cover( which is awesome by the way) you’d think this is going to be a dark piece of work. Truth is I’d say the are actually more fun and for lack of a better word their music is pretty. The violin parts while never drowning anything out are always right there adding a wandering grandiose feel to the music. The vocals add a lot to this too, for the most part we get my favorite mid range raspy growls. Usually I’m not huge on operatic vocals but they did it just right . I imagine because their not over done, but whenever clean vocals were employed on this album I loved it. The band just really knows how to do it. If I were to draw some comparisons I’d say maybe a bit of Yonder Realm mixed with Nevid. I’d do a bit of track by track but I’m t gonna lie I can’t read them fortunately I understand folk metal and Eldiarn are as fluent in that as it gets. Good album all around.