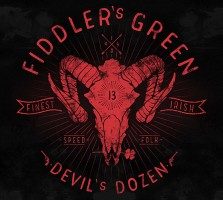 After they have celebrated their 25th anniversary, Fiddler’s Green is releasing another studio-album ‘Devil’s Dozen’. What’s in a title? Well, everything is in the title. A devil’s dozen of songs, 13 in a row, but not the usual ones. Fiddler’s Green has jumped out of their box, like a devil. Not a lot traditional Irish songs on this one, oh no, despite they do a very nice job with the well known song ‘Leaving of Liverpool’, they managed to fill this album with lots of fun stuff. A number of covers, but not of the traditional folk songs, although they’re old ones, but the album is nonetheless FOLKY AS HELL.
In the second track you might put up your ‘worried difficult face’ when they do ‘Bottoms up’, a song which reminds you of songs from the hitcharts, but they pull it off and give it a nice Fiddler’s Green touch. But they really got me with ‘Down’, when I heard it the first time I couldn’t appreciate it at all, the song seemed to be all over the place, but with every time I listen to it, it grew and grew. And at this point I have to stop writing when I’m listening to it, because I can’t sit still, what a perfect thing they created, the touch of ‘El Condor Pasa’ is simply brilliant.
When you’re as old as I am, you might remember ‘Boat on the River’ once quite a ‘hit’, a ballad from a metalband. It’s in songs like this, just like in the next one ‘Perfect Gang’, Tobias gives his mark to this album. The violin is playing a more prominent role then ever on ‘Devil’s Dozen’.
They even take things a little louder then usual with the punky rocksong ‘All the Way’, in which we get ska-rhythms on top.

Fiddler’s Green has done a magnificent job with this album, covering songs, are better lending ideas. This album has lots of moments when you think ‘this song???”, but in the end they’re all rebuild in a brilliant way, giving you lots of joy. I love it!!!
Let’s play ‘Down’ once again…