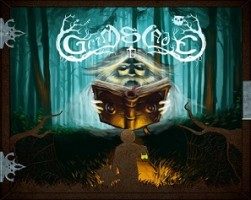 St. Petersburg Russia is home to some of my favorite bands… Svartby, Troll Bends Fir and Abracadabra amongst others. If Grimslade keeps it up they will certainly be on my list. They have released a 5 track EP entitled “Wherever The Tales Go”, based on the title alone it would be hard to pin down what genre they are. While not as swampy as Svartby, I would say they are on the shores of the bog or lost in the marshes somewhere. I think a folky Amon Amarth or Helsott are really good comparisons, not thrashy like a lot of swamp folk but a little more melodic death oriented. Varang Nord, Trollgasm or Illdåd could also be decent bands also to be compared to. Strip away the folk instrumentation and you will hear what I mean, chugging riffs, mid speed double bass driven drums and death growls.
After the obligatory instrumental intro of “Grimslade” you will have 4 tracks to delve into, 3 originals and EP cover “Mordor Goodbye!” originally performed by Russian pop duo Car-Man. The three originals all have a theme to them…..fairy or folk tale characters (“Blue Bear”, “Puss In Boots” and “The Pied Piper”). Listening to them you wouldn’t necessarily think that is what they are about as they are just tracks all covered in dirge and muck. The tracks are in the 4-6 minute range so quick bursts of boggy deliciousness. It is a quick 20 minute listen and shows a lot of promise. The guitar sound is foggy and distorted which works wonderfully here and the accordion (?), fiddle (?) and wind instruments cut thru the mix. I like anything swampy and this does it for me as usual. I would like to think that next release will be full length and carry on what they have done on this initial release, too bad some newer tracks didn’t make it to this but killer nonetheless, great EP.