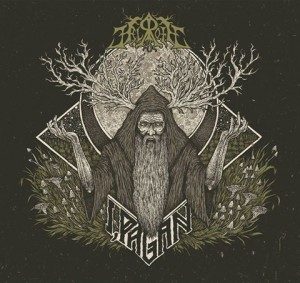 Poland’s Helroth have recently released their first full length entitled “I, Pagan” via their label Art Of The Night Productions (home to killer acts like Merkfolk, Valkenrag, Morhana, Pravia and many others) I wasn’t sure what to expect as I am not familiar with their previous releases (a demo and an EP both from 2013) and was both surprised and excited at this amazing debut from them. This 7 piece from Warsaw have put together a nice variety of songs and styles that all seem to fit their overall sound. I think the closest acts that come to mind were a mix of Winterhymn, Arkona, Ensiferum and Kanseil, a blend of heavier pagan influenced metal with a definite lean to some folkier material. The album features 14 tracks in total, including intro and outro and is almost an hour in length. One of the first things I noticed was that the album was split between tracks in Polish and tracks in English, a unique idea and I think a nice way to introduce yourself to a wider audience. Helroth seemingly are comfortable in doing interlude, softer passages (“Mists Of Eternity” for an example) as well as “punch you in the face” tracks too (“Wiedźma”), there really is something for everyone on here. They definitely show restraint in not overdoing it with so many musicians but also utilize everyone so no one is left in the dark for long. I think you will hear a couple of tracks maybe not as strong as others but those are definitely in the minority as the tracks here are either glorious, introspective or both. There is enough experimentation with things here to see that Helroth could go in a multitude of directions…..all positive. There is tons of violin and flute along with blast beats, riffs, various vocals, faster, slower, instrumentals, yes it is all in here. A solid mix and production make this even more enjoyable without being too metal sounding or not spineless with enough of an edge to make for a well-rounded and enjoyable listen. Another amazing album for 2016 and instantly in my top 10 debuts of the year…