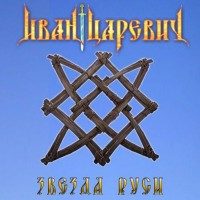 Ivan Tzarevich may be founded way back in 1999, the album ‘Zviezda Rusi’ is only the 3rd one they released in their lifetime. Their music is based on Russian Folkore and they create solid clean music with folk-influences. Singer Valeriy brings us a nice ‘authentic’ Russian voice. Nice warm and deep, sung with an enormous strength, which fits perfectly with the music.
I didn’t expect a immensely fierce album by these Russians, but I was pleasantly surprised by this album. The may be no distorted guitars, no screams and stuff like that, but the music is pretty solid and when you put up the volume a bit, the music really benefits.
After a 48 seconds lasting intro with mainly piano, the folk starts and you immediately get a song which lasts over 10 minutes. When you listen to a small piece of this music, you wouldn’t expect you’ll get songs of length, but you will. ‘Niebo v oskolkach’ is the shortest one with under six and a half minutes. And this isn’t a bad thing at all, the songs all tell their own tales and are build up with care, don’t expect endless drawn-out songs, but there are lots of alternations. You’re entertained until the finale note of a song. Especially the longer tracks have almost the feel of classical compositions, with all kinds of intermezzo’s and alternations, build together to very strong compositions.
Only ‘Niesmiejana’ is a bit more subdued, in my opinion the only track on this album which could have been replaced, the previous six certainly deserve a spot on this album.
The album ends with a radio-mix of ‘Kolovrat’, we have heard this song earlier and I must say I prefer the original version.

Ivan Tzarevich has taken its time for this album and this pays off. This album is very well balanced, and very well composed. It’s different from what we’re used to in folk-metal, but it’s certainly worth listening!