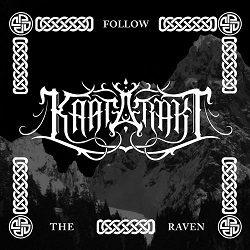 Newcomers Kaatarakt from Switzerland release their first EP. You know the saying ‘You only get one chance to make a first impression’. Well, this EP has left me with mixed feelings. The good news is that the most negative side of this first impression should easily be solved.
A one minute intro is the definitive first possibility to get a feel for the band. No worries here. A nice mood setting instrumental part, placing the band within the range of folk or maybe fantasy metal. Good enough to keep listening. And then first real song ‘Follow the Raven’. And within seconds my mood changes from hopeful to puzzled. The sound is extremely dull. Immediately I wonder why. How can you not understand that your first release should be crisp and clear. Unless you’re a black metal band, obviously, but that’s another discussion. It is not possible not to be annoyed by the bad production. Such a shame, because a lot of potential listeners and fans will be put off and stop listening at once. We soldier on, though.
And I am glad for it. Because underneath the poor sound there is plenty to enjoy. Harsh voice, folky melodies, an accordion and distorted yet melodic guitar lines. And there’s more. Kaatarakt is not a one trick pony. ‘Follow the Raven’ is a rather serious affair, highly driven by keyboards and piano (?). Next song is a lot more tongue in check with counter rhythms, inviting you to have a little dance around the campfire. I am strongly reminded of Ensiferum, which the band rightfully names as one of their main influences. Ending in a whirlwind of shouting and distorted guitars. And then, why oh why end the song with a deep burp? Is this the band’s way of saying they don’t take themselves too seriously? Again, colour me puzzled..
Third song ‘Waiting for the Ragnarok’ is a different song once again. A slower pace, acoustic elements, these guys know how to write a good, interesting song. Yet again, there is something amiss. Not like on the other songs, the singer sounds real croaky. Like Black Messiah on their latest album Heimweh. Variation is good, but why sing so badly if your normal harsh voice fits the music so much more?
Last and longest song Bloodwings is a decent try to write an epic song. Flute (from keyboard, I assume) and guitar start with twin melodies. Rather deep grunts alternated with higher shrieks take you along on this journey. Some really interesting riffs. This is probably what the band is best at. Now it looks the band has not chosen exactly what sort of music they will be making. Accessible fun music or more serious epic stuff. They could choose to keep making both at the risk of no one loving all their music.
A few drawbacks then from an otherwise perfectly interesting EP. I can’t remember having so much to say about an EP. But for Odin’s sake, start by improving your sound on record!