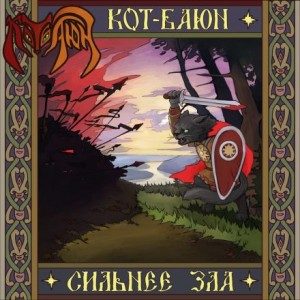 Russia’s Kot-Bayun have just released their official debut album which translates into “Stronger Than Evil”. What is a “Kot-Bayun” you may be asking? I believe it is a mysterious cat from Russian folklore….. if you look at the cover art I think I am probably right. Based on cover alone I probably expected something a little heavier music wise. I was delightfully surprised that they are a female fronted relatively straightforward folk metal band with a mixed bag of styles in their arsenal. The album has 11 tracks and all of them are relatively short….. the longest track being slightly over 5 minutes. I would say that I immediately would draw comparisons to Brezno or Zaria style wise, with a touch of Grai in there too.
Some of the tracks tend to stay a little more metal and then others have more folky tracks featuring instruments that sound like pipes or keys of various types and mandolin. If the folk instruments or female vocals weren’t there you probably say they are maybe thrash or power metal…..most mid paced but some bursts of speed. I think all of the tracks are on par with each other with some offering a little more of a subdued approach and others more raucous…..a nice blend of styles. I would say there isn’t anything super memorable on here though……. good musicianship but there aren’t too many catchy hooks that you will hum afterwards. Overall a decent release and certainly a solid debut album.