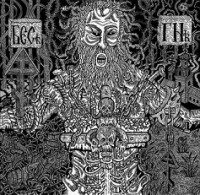 Leshak is a folk/death metal band out of Moscow. I’m pretty excited to review this one as I don’t hear a lot about these guys, yet anyway. I’m pretty sure Besogon will help change that. Their first album Chertovorot showed a lot of promise. I liked it but at the same time felt it was a bit safe and took the route of a lot of bands from their region and sounded quite a bit like Arkona at times. Not exactly a bad thing , just safe. Pustovyat however caught my attention a little more there was obvious progressions in the songwriting. Taking more risks they’d become heavier, catchier and all around more fun to listen to. It’d become obvious to me Leshak was a group to watch out for. Besogon has been out a good four months now and I’ve had a while to enjoy it, everything I liked about the last two albums is still intact. They’ve really tightened up their sound, the production is great and everything flows perfectly. In terms of heaviness they give Rogaty Kolokol a good run for their money. Besogon for the most part is heavy as hell, while at the same time doesn’t drown out the folk elements as stated before it really does flow perfectly. My personal favorite track is Blessed it showcases all their strengths really well, while proving they have a couple tricks up their sleeves. Its followed up by a cover of Kantele, a more traditional folk sounding song that quickly gets turned on its head into a fun drinking kind of metal song. Honestly the entire album is top notch and I don’t have any negatives to say about it. The word swampy has been getting used a lot for some folk metal lately and these guys fit the description pretty aptly in my opinion. If you’re a fan of the heavier side of folk metal you can’t go wrong here, this album rarely let’s up on the speed and crunch. Not prettiest piece of work which is fine by me , but rather a big muddy stomp in the right direction. If Leshak hasn’t become a staple in your folk metal diet, then give Besogon a listen and I’m sure it will be.