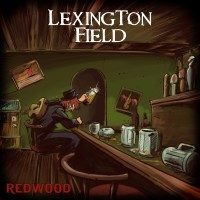 This year Lexington Field is back with a very special EP. The band has locked themselves up to rethink some of their songs and they took 6 of their older songs to work on.
This EP ‘Redwood’ starts with ‘Old Dirt Road’ the title track of one of their previous albums, well, this whole album is even more a ‘matter of taste’ than it usually is,
but I don’t think the new version of this track was really an improvement, it’s just another way to do it.
‘Poor Troubled Life’ has gotten a much warmer feel than the original version of this track. Quite a nice one, although this EP is until now a rather calm piece, regarding their very nice previous album ‘Greenwood’.
‘Rest of Our Days’ was originally a rather solid track of their ‘No Man’s War’ album. It has become a nice campfire sing-a-long song now, could be nice for some folk-fans, but I want more volume, more ‘can’t stand still feeling’.
‘Duke of Green’ is again one of their louder tracks, but the re-make is again obviously more a song you sing in your living-room, while someone is sleeping in the house. You won’t make the neighbours mad, playing this stuff.
I don’t dare to check out the next track, because it’s obviously the purpose of this album to create acoustic versions of some older tracks. And yes, the next songs fit this idea as well.
The album closes with an pub song ‘Good Times’. The whole album is well produced and sounds very nice, which give the songs a bit of a matured sound, this doesn’t go for ‘Good Times’, I don’t know where the band recorded this, and they sure sound they have a good time, but it sounds poor.

Wow, a bit of a bummer to me. I was hoping Lexington Field was going to sound a bit heavier after their previous album ‘Greenwood’. I can see they had good fun, looking at their old songs again, and creating this album ‘Redwood’. I hope the Lexington Field fans can appreciate this. It’s hard for me to hear some of their finest songs stripped down to this kind of acoustic songs. This EP obviously shows their musical skill, but I like Lexington Field more, when they hit me hard with their fiddle and critical lyrics.