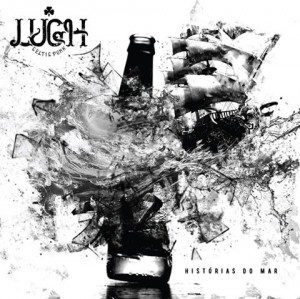 Two years after “Quando os canecos batem” the Brazilians of Lugh has released the newest album “Histórias do mar” (“Sea Histories”). Even with the new vocalist (which was also a violinist), the band maintained the essence of the previous album. With the exit of violin lines, the accordion became more evident and powerful.

To point differences, “Quando os canecos batem” was “more punk” than the new one. On the other hand, the band’s maturity left the sound heavier in “Histórias do mar”. The changes that I have quoted are subtle and it shows that the band has found its sonority. Musically, you can feel A LOT more of Bad Religion here.

The highlights are “Hoje à noite” (“Tonight”), “Tantos caminhos” (“Many paths”), “Mais um dia” (“One more day”) and “Lutando em vão” (“Vainly struggling”) – which has the participation of Thiago Trosso (Abraskadabra) and a bit of ska!