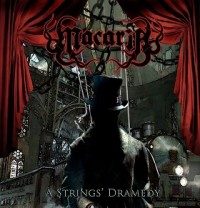 Sometimes it’s hard to believe that you are listening to a debut album. When all the musicians master their instruments, the songs are well written, the album as a whole makes sense, it’s contemporary, but may become a classic, you know that you are onto a winner. You don’t have to listen to the album twice to like it. You do have to listen five times to come to love it.

Italian Macaria are the band you want to get to know if you like more than one band of the following list: Savatage, Trollfest, Fleshgod Apocalypse, Fairyland, Little Dead Bertha. Elements of rock opera (storytelling), death metal (grunts and growls), power metal (speed and guitar solos), and folk metal (unusual sounds, mostly from the synths) are all magically blended to make a very interesting album. For those interested in epic stories, the lyrics are a must read. Multiple layers are to be found, so I won’t get into that, other than telling you that these guys have not chosen the easiest path. That goes for the music as well. Don’t get me wrong, I love the power metal of Iron Savior, but they have written the same songs over and over again. Macaria is in a different league. And the beauty of it is that, although there has gone a lot of thought in the songs, there still is plenty room for a bit of fun and playfulness. Listen to ‘Shaped Water’ and you will understand my meaning. This song defines the band. Speed, growls as well as clean vocals, accessible melodies, six minutes of quality fun. And room for every instrument to take it’s minute of fame. In this example the bass player adds a little extra to an already interesting song.

What’s more is that every song has something you will like. One time it’s the structure, like afore mentioned ‘Shaped Water’. On other occasions it’s the mood, like on instrumental ‘Midday Strangers’. The again you’ll be wowed by the blend of acoustic and metal influences on a song like ‘The hidden Filth’. This is even more amazing, considering that the album is constructed around the theme of puppet playing. You may think that confines your possibilities, but Macaria proves otherwise. If you are able to keep your head still during the faster parts of ‘Tar Nectar’, you should question your love for metal.

Give this band a warm welcome on the metal scene. They are original and bring an interesting blend of metal. For every reason not to like the band (they are not extremely heavy, they don’t sing in their own language, they don’t belong in a clear category) there are more reasons to love them. If you are able to look and listen beyond the strict boundaries of folk metal, I am sure you will agree.