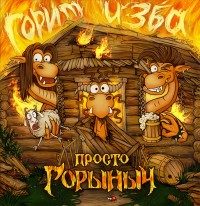 Another Russian band on the scene. The country delivers one band after the other. A lot of it is dark and moody. On the other side there is a lot of light, party metal on the other side. That’s where we find Prosto Gorynych. Actually on the ultimate funny side of the spectre. Maybe a bit too funny even.
Second album of these four guys and one gall. The accordion is the typical folk instrument of the band. Accessible melodies, some counter rhythms. Yes, undoubtable folk metal. Clean male vocals for a change with occasional female vocals, also clean. Clearly, the band is all about having a good time. Listen to the last 20 seconds of opener Хорошо and you’ll know what I mean. Generally I love bands that don’t take themselves too seriously. Have a laugh, life is hard enough. That sort of thinking. Prosto Gorynych take it to another level. Suddenly Trollfest seem like a bunch of old, grumpy true metal purists. And that’s hilarious for some time. And then it gets a bit old. Mostly because most of the songs lack a bit of wow. Like in ’wow, that’s an interesting rhythm / melody / guitar part / …’ You get the point.
Furthermore the male singer lacks power. His clean singing is not too bad, but I wonder whether he can bring it live convincingly. The female singer does not play a big role. Hard to judge her added value. The band could become the Freedom Call of folk metal, but therefore they would have to write more interesting songs. Not a bad record, mind you. If you don’t watch out some of the tunes will stick in your head. But it certainly is not for everyone.