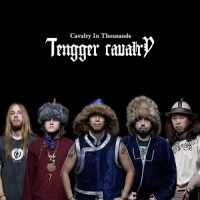 Global Music Award-winning Nomadic Mongolian folk metal group Tengger Cavalry have reissued two of their earlier albums originally released in 2013 and 2014, re-composed and instrumented. 2013’s The Expedition was reissued as Cavalry In Thousands, and 2014’s Ancient Call was reissued as Hymn Of The Earth. Both albums are available via Bandcamp.

Each reissue features brand new melody compositions, vocal lines and re-recorded guitars. They thought the original songs that were written years ago had the potential to be modified and improved, so the texture and melody was transformed, replacing death growling with throat singing, etc.

Tengger Cavalry has originally released ‘The Expedition’ in an early stage of their existence. The modifications work out very well in this re-worked album ‘Cavalry in Thousands’.
Right from the start you’ll get real Asian sounds and melodies and that are very nice. It gives Tengger Cavalry a spot of their own in this crowded folk-metal world. With nice Chinese instruments added to the usual ones they created a real nice atmosphere. Listening to Cavalry in Thousands, I get the delusion I’m watching a large amount of Mongolian warriors ride through the warm Asian fields.
And they have more of this. Another nice thing from this region is the throat singing, we get that in Black Steed and this is awesome, it’s very nice to hear the singing in songs like ‘In the Storm’ of which I wasn’t very fond off, are replaced with throat singing. This gives it all a more balanced and less chaotic feel. It’s a real pleasure to get some folk-metal, which is completely different.