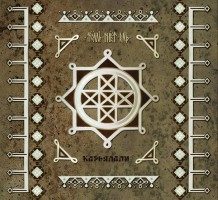 Troll Bends Fir albums are always surprising and the new one Карьялали (Karjalali) is not different. The band keeps the amazing “beer folk” (as they call) style.

“Karjalali” begin with ‘De-Da’ and this is probably the best album song. Here you can see all Russian’s versatility. The vocals of Maria “Jetra” Leonova and Konstantin “Troll” Rumyantsev complement each other in an incredible away. This album also has Jonne Järvelä (Korpiklaani) as guest music in track 3, Медведь Йонне.

It’s complicated choose the highlights in ‘Kholmogory’ but I will keep with ‘De-Da, ‘Yagoda-goda , and ‘Samogonka’.

Troll Bends Fir is a complicated band to describe, they are too original. I lost some time to try it… but I’m sure that you will love ‘Karjalali’ – whatever they are saying in Russian.