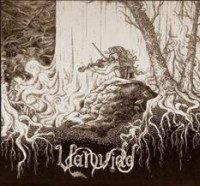 When I think of swampier folk metal, I rarely think of Norway… until now. Norway’s Vanvidd are steeped in boggy goodness but whether or not they are “swamp folk” could be up for debate. With 7 tracks on their debut self-titled album you will have to judge for yourself I suppose, but I think you will agree with me on some level. I think there are some definite connections to bands like Leshak, Svartby, and some other of Russia’s finest as well as fellow countrymen Trollfest, maybe a murkier younger sibling to Trollfest?
Vanvidd is a little more less out of control if that make sense, opting for a Finntroll style most of all I think with less humppa and more straightforward metal. Tracks average between 5-6 minutes in length which works quite well here with enough good ideas to fill up the songs with varied tempos and numerous implemented instruments. The best part of this is that the songs are catchy and memorable, I was humming riffs at work today and thought to myself “Wow that is from the Vanvidd album….”, definitely a good sign if you can remember riffs just after a few listens. I would even say this delves a little into some black metal territory but the folky instrumentation and the tempos make it heavy and accessible at the same time. Vocally and lyrically, Vanvidd opt for the black/heavier folk metal style with subject matter varying between folk tales, fairy tales and mythology amongst other things.
The production is relatively basic with not much fanciness, it does have a “homemade” sound to it which I think actually helps it to some extent.
If you liked the new Grimslade EP or the latest albums from Leshak or Svartby, I would definitely give Vanvidd a shot, there is plenty of room in the swamp for everyone… good album