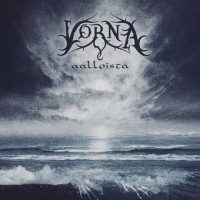 To keep the fans happy while waiting for the next full album Finish sextet Vorna releases a single. This time, you can take that literally, because it only contains a single song. They had been moving from black metal to folk metal. And now, Vorna is choosing their own style. Elements of black, mostly the shrieking voice, combined with melodic death kind of riffs and yet a folky overall feel. Can they pull it off? Yeah, baby.

In spite of the thumping double bass during part of the song ‘Aalloista’ is not a fast song. It’s full of atmosphere, clean and harsh vocals, piano melodies and subtle guitar melodies. To sum up what’s going on, you could say: the song is full of everything, full stop. Almost 8 minutes in length, the song shows what Vorna is capable of. And that is writing and playing long and interesting songs. If that’s what we can accept from the upcoming album, I say: bring it on!