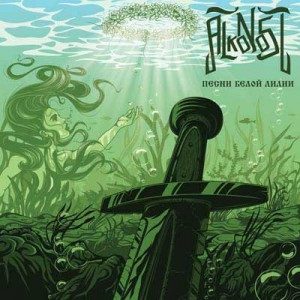 Alkonost released it’s 7th album recently. Over 20 years of Alkonost, when you listen to their albums over these years you notice a typical Alkonost sound, but giving it a closer look, you’ll notice changes over the years they brought us very nice releases.
The major change in this album, it’s almost entirely sung by Ksenia, in Russian this time. I miss the male grunts a bit, they’re are such a nice counterweight to the nice clean female vocals, making the vocals stronger. On this album we have to do with Ksenia’s voice entirely. From a vocal point of view the Gothic influences are almost gone in this album, except for ‘Khmel’, it was nice to listen to those influences on their previous album, but you won’t miss them on this one.
What remains the same is the true trademark of Alkonost, the nice combination of two guitars, and galloping drums and the keys to give it all a full and folky feel. And the well thought through compositions.

Alkonost has done a great job once again, although I’m missing the male vocals and grunt in a lot of songs, they could give it all a bit more ‘tension’ overall.