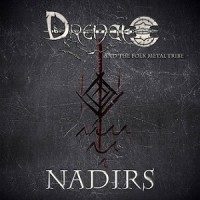 Nadirs is the third release from French folk metallers Drenai. As with their previous work it is a theme album based on the work of author David Gemmel and is an introduction to the protagonist of their upcoming full length release. That being said this is not a full length. It’s more like a short acoustic album perhaps.
Rather than the fast paced harsh approach they used before we have an entirely metal free record here. It’s not bad at all, they tackle many musical themes in the around 35 minutes of music. But for me it seemed more like a series of intros , interludes, and outros. They are all done very well and the recording quality is much better than their last metal release, but it just never picks up for me. It’s a lot like soundtrack music. It tells a nice tale and really builds up tension, but the battle scene just never comes and at 30 minutes its a lot of build up. Not to say its bad at all its good mood music, say if you’re looking to add a movie score to your work routine. I just had hard time getting into it as the song structures are more flowing than catchy. I will say this though if the full release is a new metal album with this caliber if folk music backing it, then that will be one hell of an album. Here’s hoping that’s the plan.