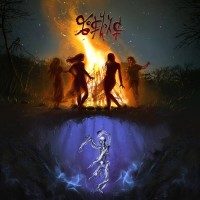 Another group hailing from Romania E-an-na have released their impressive debut EP. Consisting of four new original songs and previously released “bonus” songs, Jiana has run time of just under 45 mins so not bad for an EP really especially if you missed out on the singles. Musically I would say they sound like kind of like the angry love child of Arkona and Eluveite. And by angry I mean don’t expect any soft ballads on this one. Although when they do slow things down a touch you’ll hear a fine-tuned approach to traditional folk music. Jiana features a very full sound ranging from bagpipes, flutes, whistles, violins, and just about every instrument you could want. It’s actually really nice just trying to pinpoint each instrument especially when they go on full speed. This is because hands down the flute and accordion work has got to be some of the fastest head spinning stuff I’ve heard in a while. This really allows the rest of the band to kick it into whatever gear they choose, and in my opinion they showed great technique all throughout with a lot of nice time changes ranging from lullaby soft to break your neck windmilling fast.
The rhythm section works together just as great as the folk elements. The drums and bass stood out through every song , their time changes being one if the strongest assets of the band. Maybe it’s just that I love it when you can actually hear the bass in any metal so there’s plus in my book. But the entire band is all just as proficient in their individual crafts. Throughout Jiana you are going to hear a perfect balance of awesome catchy riffs that are accented with just the right amount of sweep picking, solos, and biting chops. Nothing ever overstayed its welcome. And the folk elements like the violins, flutes, and accordion are always right there complementing the guitars and bass phrases with equal speed and authority. For the most part the vocals are delivered in a very strong and raspy black/death style , but there are quite a few moments were both male and female vocals kick in and its just like the leads and solos, its never over done and its always implemented seamlessly. I’ve said it before, clean singing is not my cup of tea, so unless it’s done really well I’m not too big into it. A lot of times it’ll just not bother me so long as it fits. In this case I liked both the male and female clean vocals, and thought they complimented each other nicely. That being said though I think I still liked Tinca Poppi the best which is completely instrumental, but you will hear what I mean by the band’s use of time signatures it extremely fast and infectiously catchy. Honestly there’s not a song on here I didn’t like. They stuck with me throughout the day and I found myself popping Jiana back on for another go more than once in the last few days, for a debut and an EP at that I’m really stoked on this band. I’m definitely going to be interested in what’s to come from them.