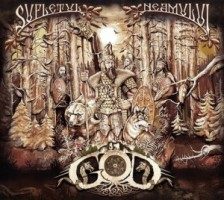 GOD The Barbarian Horde took me by surprise. I picked this one from the list randomly wanting to check out a new band as I was already pretty familiar with last couple I did. Well turns out these guys have been an established act for quite some time. Like about 20 years actually. So after listening to this album the first couple times I went through some of their back catalog. First off this band is a vastly different beast than they were at their inception. I’d say they were more of a gothic/black metal group like Cradle of Filth around that same time. Had I ever heard these guys back then I’d have definitely bought an album or two of theirs. Although I wouldn’t hesitate to say this incarnation of the band is much more impressive in my opinion. The Barbarian Horde have definitely found their stride in folk metal.
Listening to them now I honestly couldn’t think of another folk metal band they didn’t remind me of. The really do cover the board when it comes to smaller niche genres created by folk metal. Viking? Check. Pagan, huumpa,? Yes on both. Basically they some how manage to pull all the folk metal feeling and sounds together in one epic piece of work. I am very impressed with the direction they’re taking. There’s only five songs on the record but they’re very meaty , some pushing close to the nine minute mark. Immediately I’m reminded of Skalmold and Nokturnal Mortem. These are definitely good things. The Outlaws Song is a very good opener the band displays solid mastery of the mid-tempo chunkier riffs and passages. There’s a lot of nice changes and some surprises here. The song really takes a hard left turn by the end and will leave you wanting to hear what else is up these barbarians’ sleeves, and next song delivers just that.
I personally haven’t been too big of a fan of super long song these days unless they can absolutely keep my attention for that long. All of these songs do. I never even realised how long some of them were until I actually looked around my second listen. The band is tighter than ever and know how to deliver an epic song. I wouldn’t really say any one portion of the band takes the spotlight so much as the band melds together very well. My personal favorite moments were when the band had some fun with structure and took a couple drastic turns that you don’t see coming until they hit you. The first few minutes of the album paints a pretty serious picture. But in truth there a lot of really light and fun moments in the album that keep everything interesting to listen to. If there is a weak point to point out I’d say I didn’t always feel the vocals. For the most part they take a low clean route that’s very reminiscent of Heidevolk. I feel that operatic style male vocals are best as an accent when whereas GOD employ them most of the time. Sometimes I get a little bored with this type of vocal. I think I especially felt this way, because on the last song they mix those clean vocals up with harsh ones and it just sounds great. I’d love to hear more of that in future.So if you’ve missed out on these guys between 1997 and now definitely check them out now. I’m going to be looking out for any work they come up with after this one.