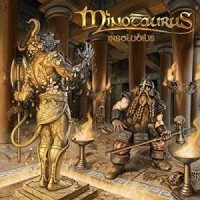 We had to wait three-and-a-half year for the follow up of the Minotaurus album ‘The Call’, but now it’s here. They called their new album ‘Insolublis’, Endless in Latin.
Their previous album wasn’t too bad at all, but I like the things a bit more unpolished and slightly heavier. When we’re talking about these German folk-rockers, I like their album ‘The Lonely Dwarf’ the most. What would ‘Insobulis’ bring?
Well, this album brings us more of the songs like we know from ‘The Call’, not bad at all, but like I said ‘it sounds a bit too polished’. The guitars seem to like to give it all a solid taste, but the guitars play they part a bit to dutiful. It’s there, but it lacks a bit of spirit.
The vocals seem to have their same old struggle. The clean male and female vocals can be very nice together like in ‘Only a Dream’ where they complement each other in a very nice way. But in ‘Cemetery’ it’s too much, it would sound a bit nicer when only one of the two vocalists would sing the main part of the song.
This album peaks with ‘Bonfire Brothers’ with nice flutes and ‘Legend’ with lots of alternations. It’s in these songs where you can hear the potential of Minotaurus. All elements I like are there, but they just don’t seem to get out in the other songs.
The title-track at the end of this album is a nice composition, the band tells us a whole little story in this over 8 minutes long track. And again they show they seem very aware of the possibilities of the mix of vocals. The song is a good showcase, but the length of the song makes it somewhat less catchy.

‘Insolubilis’ is a decent album by Minotaurus. Their fans will appreciate it. Especially when you liked their previous album, you would like this as well.