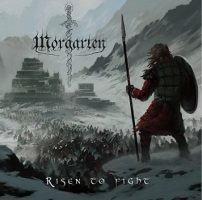 Somehow this release escaped our attention last year. No matter, Swiss metallers Morgarten deserve their place in our beloved scene. Two months ago I had the pleasure of seeing the band live. And a pleasure it was. The band thoroughly enjoyed playing live and didn’t seem to care that the audience was rather small. Hearing a band playing for the first time at a gig makes it difficult to form an opinion on their musical qualities. Then again, it was easy to approve of their positive attitude. Now we have the time to listen to their debut album ‘Risen to fight’ properly.
In a time where bands are trying to make a reviewer’s life difficult by playing a blend of all sorts of metal, Morgarten is a joyful exception. The band plays folk metal. There, I’ve said it. Sure, if you listen carefully you may here a death growl and a bit of atmospheric black metal, but overall this is the kind of metal our site is named after. A bit of blend with Viking and pagan elements as well makes this album rather enjoyable. Playing just over 42 minutes ‘Risen to fight’ is on the short side for a full album. Other than that, there is not much you can fault the band on.
A slow start with clean vocals to set the mood. From ‘Called to the war’ the speed goes up. In a measured way. Full speed is varied by mid-tempo pieces. The vocals are mostly growling, yet on the verge of being understandable. All the songs are sung in English, which nowadays is not standard within the scene. It doesn’t disturb the feel of the music at all. Within 4 ½ minutes Morgarten let you know their speciality. That’s playing folk metal at a high standard. It’s music that makes you happy. You can’t help banging your head, have a beer, have a laugh and a little dance. In fact I caught myself grinning helplessly after a few turns.
Some unexpected twists in the songs help the album to reach a level beyond average. Par example third song ‘Path in the darkness’ seems to be over after 3 ½ minutes. And then it stampedes on in a black metal kind of way. Same thing happens on ‘Wind from the Forest’. The ideas on the song are all played out. And then new melodies and rhythms somehow are introduced. It works well better on the first mentioned song than on the latter.
That having said, it’s hard to find a truly new take on the scene. So basically it’s an album that doesn’t push folk metal to new horizons. Ehm, yeah, who cares. The scene is not known for its thirst for revolution. Why else would we all hail ancient gods?
It’s fun without being overly funny. It’s metal without being extreme. It’s folky without being all fluty and children of the forest and all that. I for one am looking forward to seeing Morgarten once again this year on their tour with Nightland and Slechtvalk. If you are anywhere near their gigs, check them out. Guaranteed to give you a good time!