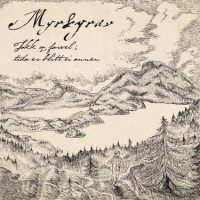 I’m sure there are tons more but if I had to put a list of bands that everyone should know about and probably don’t, Norway’s Myrkgrav would most likely be at the top of my list. I would say the main reason is not being super prolific (only 1 full length and some smaller releases since 2004). Here we are in 2016 and the 2nd album has finally been released entitled “Takk Og Farvel; Tida Er Blitt Ei Annen” (“Thank You And Farewell; Times Have Changed”). Sadly, this will be the last Myrkgrav release as Lars has decided to hang up his Myrkgrav hat and pursue other interests outside of music. If you are going to end the project then this is a fitting “swan song” chock full of newer material, instrumentals and redone versions of older tracks, it certainly has a retrospective feel about it but also an introduction to all things Myrkgrav.
Not familiar with Myrkgrav? Sonically they blend black metal stylings with folk instrumentation, I think Sweden’s Utmarken could be a nice comparison on some level (with the Hardanger fiddle replacing the Nyckelharpa) although more diverse and heavier, maybe some less progressive/folkier Borknagar or Enslaved? Or maybe similar to what bands like Baldrs Draumar or Grimner do……mixing acoustic/folk with metal? Whatever the blend is, it works on every level from the pure folk to the heaviest tracks. A couple of older tracks received some updating (“Finnkjerringa” and “Om Å Danse Bekhette”), not that they really needed them but it is nice to revisit them. While the songs with vocals are in Norwegian we are treated to one also sung in English (album opener “Skjøn Jomfru”) which is equally successful both ways, not an easy task as I find most that try this have a hard time transitioning from native tongue to English.
There doesn’t seem to be anything that doesn’t work here….the heavier/more black metal styled tracks crush, the folkier tracks kill and the instrumentals slay… convinced yet? I certainly hope so. The production and mix are both smooth and heavy…..the light touch of folk instruments is perfect with the bite for the heavier tracks there as well. While I was starting to finalize my top albums of the year, Myrkgrav drops this bomb on me and ruins it, in a good way.
While I hate to see this project end, it is better to end on a high note for sure, congrats on an amazing (albeit too small) catalog of work. I guess quality is much better, after all, than quantity. I am crossing my fingers that 10 years from now maybe you will revisit some of these tracks? I will keep the torch lit in the meantime… great album.