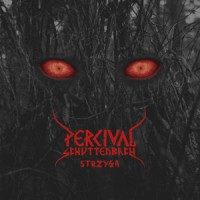 ‘Strzyga’ (Vampire) is the title of the new Percival Schuttenbach album. In my previous review, on Svantevit in 2013, I mentioned I wondered why this band didn’t have a label. This seems to be fixed now, Sony Music has taken them under their wings. And this does the band justice, you can mention this band in one long breath with Eluveitie, Heidevolk, Ensiferum, Korpiklaani and all the other ‘big names’ in folk-metal. And they do this in their own style as well, the Polish lyrics, Slavic folk, use if lots of authentic instrument and lets not forget the unique combination of voices, it’s the combination of these things which makes this band unique. And with this statement a new question pops into mind: why don’t we see this band touring in a nice package through Europe or elsewhere in the world?
The band has expanded over the last years, first by adding Christina on vocals and keys a few years ago. Last year they added Marcin on bass. Joanna has given up this position which enables her to use her vocal capacities to the max, not longer bounded by the limitations of playing bass at the same time. You can hear this all over the albums, because she gives Percival Schuttenbach such a nice taste with her remarkable voice, full of anger sometimes, but at least with a nice bite everywhere.
This album is not only loaded to the limit, there’s over an hour of music and on top of that the band has added a bonus track to this. But the quality of the songs is once again astonishing. With ‘Marysia’ you get a typical Percival Schuttenbach song to start with. Nice, solid, with lots of folk and the delicious aggressive vocals we’re use to by them. But don’t worry it doesn’t stop here, there are lots of very very nice songs on this album like ‘Rodzanice’, a track you’ll probably know of their video. And ‘Pocałunek’ in which they go in between nice solid folk-metal, with mean vocals and traditional folk.
After enjoying almost an hour of these nice music, you get the beautiful outro ‘Rosa’, in which they do justice to the nice Slavic harmony singing with multiple female vocals…
And all what remains then is the gorgeous Bracia Figo cover ‘Wóda zryje banię’ and then it’s over, but luckily you have a replay button on your device, so let history repeats itself!

Once again a great album by Percival Schuttenbach, with lots of awesome folk-metaltracks in their own unique style!