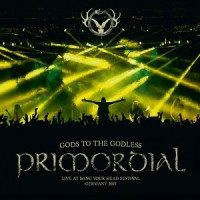 The end of 2016 is nearing and you start thinking about Best Albums of this year. Primordial’s previous album ‘Where Greater Men has Fallen’ was in our opinion the best album of 2014. This added to the fact Primordial is one of my favourite live acts, makes me excited, because the band is releasing a live album this time.
Primordial, what should I say about them, you love them or… you have to listen again. No seriously, what I love about them are the ongoing whimpering bass, guitars with pounding drums, they seem to go on forever and hypnotize you. And then these intriguing vocals of A.A. Nemtheanga, the music captures you and is almost indoctrinating, getting you into a trance.
I was lucky enough to see the band live twice. This was a unforgettable experience, I’ve seen quite a few bands live and among them were a lot of impressive concerts. A Primordial concert was not only a nice concert but a complete experience. In all their simplicity they music paralyses you and you can only move along with the sound of the ongoing music, while watching the stage and looking at this amazing frontman. With his intriguing face, he grabs you by the throat and it’s almost scaring to see him perform on stage.
The band recorded their gig of this year at the Bang Your Head festival, which is by the way a very suitable description for the band, because this is the ultimate Bang Your Head music. We have to miss the intriguing stage appearance of the band of course, but can this special atmosphere be captured on an live album?
I can be frank about this, the answer is no, not really. It’s rather nice to record just a single concert, this keeps it all coherent. But you have to deal with weaker sound or mistakes in some places as well. That’s a thing this release suffers from as well. The concert doesn’t start to well, small mistakes here and there, a sound which isn’t optimal. This doesn’t do the music real justice. Luckily the band recovers from this and somewhere halfway the album, it begins to sound like Primordial I’m used to. ‘Bloodied Yet Unbowed’ is sounding quite nice, but I still prefer the studio version from their album ‘Redemption at the Puritan’s Hand’. The album is getting better and better with every song, so when ‘Empire Fall’ is over, I’m quite happy in the end.

I’m happy to have a new Primordial piece in my hands, but despite the fact I can’t wait to see this magnificent band play live again, this album doesn’t full-fill my desires to hear (and see) them play live. A good compilation of their work over the past years, but they can do much better.