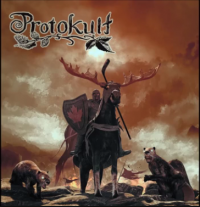 It has been over two years ago since we got to hear something new from Protokult. Their album ‘No Beer in Heaven’ was one of the best albums of 2014 in my opinion. The band has a lot to offer, on top of the nice compositions and music, they have all kinds of vocals, produced by their male and female vocalists.
Now they’re back with a self-aclaimed Canadian metal national anthem ‘Oy Kanada’. They released this song as a single, I’m longing for the old days when a single has at least two songs, one on each side of the piece of vinyl. In these modern days a single is just one song, that is not enough in my opinion. I want to hear more from a band.
In ‘Oy Kanada’ Protokult gives once again a display of all the stuff they have in store. It’s all there in one song, the solid guitars and all kind of vocals. Quite a nice track, I don’t know Canada well enough to know if this will be their national metal anthem, but Your place in life is where you want to be. 🙂
It’s good to get proof, the band is still active and still making nice songs, now on to a next album!