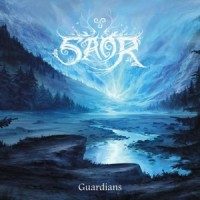 Probably one of my most anticipated releases for 2016 is the newest epic from Scotland’s Saor. While I have been kept at bay with Andy Marshall’s other project (Fuath) and have still had the previous Saor album (2014’s “Aura”) in my listening rotation, “Guardians” has been long in my sights. To say my expectations were high is a vast understatement and I can easily say I am certainly satisfied and fulfilled with this amazing album. Anyone who knows me well knows two of my greatest passions are Scotland and “extreme” music and no one fuses my love for both quite like Saor. With 5 tracks totaling over 55 minutes, “Guardians” will transport you far away musically and lives up to any sort of combination of “atmospheric folk/celtic metal” tagging from beginning to end. If you are expecting “Aura Part 2” I think you will be happy to know that a connection is there to “Aura” but it is much more diverse in style and risk taking and overall a much stronger and deeper album. While the album of course is heavy, the softer interlude passages in each track are even heavier, a testament to Andy’s amazing song writing and arrangement abilities. If the music isn’t heavy enough for you, pair them up with lyrics inspired by and from Scotland’s most notable poets, namely Robert Burns and Sir Walter Scott amongst others. The songs to me are more tangible and connected to Scotland more than ever with this awe-inspiring idea to partner up the incredible music with the deep-rooted words.
While I will never have anything to say negatively about “Aura”, I feel that “Guardians” seems more natural and effortless sounding than “Aura”, again I think the connection is stronger than ever to the land, nature and history of the country. The folk instrumentation seems to play a larger, more integrated role as well with lush strings, fiddle and bagpipe throughout each track… a finely woven tapestry that you hear something new with each passing listen. Vocally, Andy has a more primal and visceral approach on “Guardians”, equally fog shrouded and commanding with passion behind each syllable. At the end of the day, this is an album that will satisfy the heavier music listeners to the more folky ones and everyone in between. From the topography of the highlands, the moors, the lochs and the isles, from the history of Stirling to Bannockburn and Culloden, from Edinburgh to Inverness and all points in between, ”Guardians” is a fitting tribute to all of it…